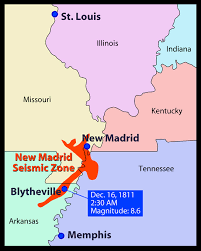 When you hear about earthquakes in the US, most people think immediately of California or maybe Alaska. There are almost daily earthquakes in these states. What is not as well known are other significant fault systems that lie under other parts of the United States: New York City , for example or the New Madrid Seismic Zone. A  major earthquake event in the New Madrid Seismic Zone  or “NMSZ”, at the junction of four states: Arkansas, Missouri, Tennessee and Kentucky, would physically impact a much larger area than would similar earthquakes elsewhere in the United States.

The reasons for this are the susceptibility of the NMSZ to soil liquefaction and the efficiency of the earth's crust in the Central and Eastern regions of the United States to transmit ground shaking, according to FEMA and the USGS. What this means is that under the earthquake-induced vibrations, water suspended in soil causes it to liquefy. The ground beneath your feet, beneath buildings and structures…turns to mush.

The second risk is due to the harder, colder, drier and less fractured nature of the rocks in the earth’s crust under the central United States, earthquakes in this region affect an area approximately 20 times larger than in California and most other active seismic areas. The rock strata in the New Madrid region are much older and this ancient rock is, in a sense, “brittle” and instead of deforming, it shatters. Other vulnerabilities are the major cities with large populations near the NMSZ. These cities that do not have the same level of earthquake experience as does California.

The first written account of an earthquake in the New Madrid Seismic Zone region was by a French missionary on a voyage down the Mississippi River. He reported feeling a distinct tremor on Christmas Day 1699 while camped in what is now Memphis, Tennessee. In the early 18th century three successsive quakes occured in the New Madrid system. Luckily fatalities were minimal, simply because the region was sparsely populated and there were few multistory buildings.

“On December 16, 1811, shortly after 2 AM, the first tremor of the most violent series of earthquakes in the United States history struck southeast Missouri. In the small town of New Madrid, about 290 kilometers south of St. Louis, residents were aroused from their sleep by the rocking of their cabins, the cracking of timbers, the clatter of breaking dishes and tumbling furniture, the rattling of falling chimneys, and the crashing of falling trees. A terrifying roaring noise was created as the earthquake waves swept across the ground. Large fissures suddenly opened and swallowed large quantities of river and marsh water. As the fissures closed again, great volumes of mud and sand were ejected along with the water. The earthquake generated great waves on the Mississippi River that overwhelmed many boats and washed others high upon the shore. The waves broke off thousands of trees and carried them into the river. High river banks caved in, sand bars gave way, and entire islands disappeared. The violence of the earthquake was manifested by great topographic changes that affected an area of 78,000 to 130,000 square kilometers. On January 23, 1812, a second major shock, seemingly more violent than the first, occurred. A third great earthquake, perhaps the most severe of the series, struck on February 7, 1812.” 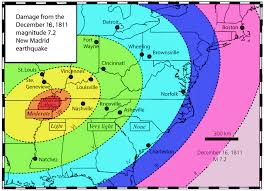 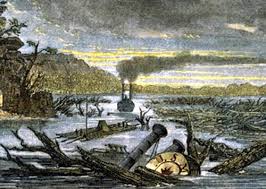 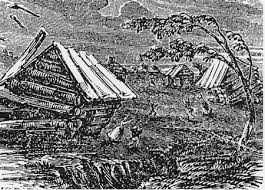 Many scientists believe we are overdue for a large (>6.0) earthquake, and that through research, public awareness, and emergency preparedness may be able to substantially decrease these estimated losses. Based upon historically and instrumentally recorded earthquakes, some scientists suggest the probability for a magnitude 6.0 or greater earthquake is 25-40% in the next 50 years and a 7-10% probability for a magnitude 7.5-8.0 within the next 50 years. (source: USGS Fact Sheet FS-131-02)

Some scientists are not so sure. A team from Purdue and Northwestern universities analyzed motion of the fault over eight years using global positioning system (GPS) measurements and found that it is much less than expected. They theorize that the New Madrid system may be shutting down and the geologic stresses migrating to other fault systems.

Second and third order effects:
*       An 8.0 earthquake in the NMSZ would directly impact between 7 and 11 million Americans, but many more would feel the effects.
*       Many natural gas pipelines run through the junction of the four NMSZ states from the Gulf of Mexico to the Northeast. The flow of natural gas would be disrupted
*       Significant federal response would take from three to five days to even enter the affected areas: roads, bridges and airfields would be damaged. The survivors would be on their own for three to five days.
*       Many of the highway and rail bridges across the Mississippi River in and around the NSMZ would be damaged. Shipments of goods, like food, across the US would be disrupted.
*       Significant US military personnel and equipement would be focused on rescue and recovery; the resourcing of operations in Iraq, Afghanistan and elsewhere would be put on “pause”.
Responding to NMSZ would become the Department of Defense’s number one priority.

The answer might be ...possibly.  Earthquakes are natural events that occur along faultlines and quakes will eventually occur at some time as stresses build up in the fault. An earthquake is a natural release of geologic stress.

Certain activities, such as building a dam, however are thought to accelerate earthquakes. The accumulated weight of the water behind a dam is thought to increase fault stress and trigger an earthquake. This is suspected in a Chinese earthquake that may have been caused by the filling of the Three Gorges Dam.

Another suspected cause is the injection large quantities of liquid into deep wells. This may have occurred in 1961 in Colorado when the US Army attempted to dispose of waste chemicals by deep well injection.

If this is true, then geologists need to closely monitor the increasing use of a technique to extract natural gas called hydraulic fracturing or  "fracking" which involves the deep well injection of water into gas bearing rock. This technique is planned for use in Pennsylvania to exploit the Marcellus shale formations for natural gas.

The recently discovered Utica shale formations which lies several thousand feet below the Marcellus shale promise even more potential natural gas opportunity. Extracting this gas by fracking would involve injection of large quantities of water into wells that may be over ten tousand feet deep.

Why is this of particular interest?

A major earthquake event in the NMSZ may well be unexpected, unlike California where frequent earthquakes are a fact of life. Due to the brittle geologic strata, the shock effects will propagate to greater distances. The building codes in California and Alaska incorporate more earthquake resistant technologies than do those in St. Louis, MO or Memphis, TN. The ability of responders to even get into the disaster zone is problematic.

Secondary fires caused by gas or petroleum pipeline leaks, as well as fires in built-up areas may go unchecked for days. Commerce on the Mississippi River will be affected, which will cause commodity shortages both upstream and downstream. Should the event occur during wintertime, severe weather conditions may imperil many survivors as well as impact those in other regions if energy supplies are disrupted.

In short, the NMSZ is in the heartland of the US, and is a potential risk that commands less attention than corresponding earthquake risks on the west coast. It has the potential to impact a broader area: geographically, populationwise and in terms of the national economy.

What is being done to mitigate this risk?

Public information:
The emergency management agencies at the state and county levels within the NMSZ provide information on what citizens need to do. The NMSZ is an active fault: minor earthquakes occur almost daily. While this is a constant reminder, people may tend to downplay the risks.

Response and preparedness:
A New Madrid event will be the scenario used in the National Level Exercise (NLE) 2011. The NLE program is a top level, annual, national exercise set run by FEMA that tests the coordinated capabilities of all branches of the federal government to respond to a serious disaster. The NLE program also integrates the responses of state agencies, industry, utilities and volunteer organizations.

FEMA stocks emergency supplies at national response logistics centers at key locations across the US. Here is a recent solicitation for prepackaged meals. FEMA forsees a requirement for 2 meals per day for 7 million people for 10 days (140 million meals) to support response to a New Madrid event.

All the fifty states have entered into the Emergency Management Assistance Compact (EMAC). This agreement allows the states to send resources to assist their neighboring states that have suffered a disaster. Governors can deploy police, firefighting, medical, National Guard and emergency management personnel across state lines to assist the disaster response. EMAC provisions allow Governors to "cross-license" medical responders to provide disaster medical support. The EMAC worked very well in the response to Hurricanes Gustav, Ike and Hannah in 2008.

►  Back to Earthquakes Main Page