Earthquake Hazards in the United States

The United States, like many other parts of the world, experiences earthquakes on almost a daily basis. Most of these occur in well known, seismically active regions like California, Oregon and Alaska but eartquakes have occurred in other parts of the USA that are not typically thought of when one considers this threat.

Some Major Seismic Systems in the US

The San Andeas Fault in California

The New Madrid Seismic Zone at the juniction of Arkansas, Missouri, Tennessee and Kentucky

The Cascadia Subduction Zone from Northern California to Vancouver

What causes an earthquake, exactly?

An earthquake is the vibration, sometimes violent, of the Earth's surface that follows a release of energy in the Earth's crust. This energy can be generated by a sudden dislocation of segments of the crust, by a volcanic eruption, or event by manmade explosions. Most destructive quakes, however, are caused by dislocations of the crust. The crust may first bend and then, when the stress exceeds the strength of the rocks, break and "snap" to a new position. In the process of breaking, vibrations called "seismic waves" are generated. These waves travel outward from the source of the earthquake along the surface and through the Earth at varying speeds depending on the material through which they move. Some of the vibrations are of high enough frequency to be audible, while others are of very low frequency. These vibrations cause the entire planet to quiver or ring like a bell or tuning fork.

Geologists have found that earthquakes tend to reoccur along faults, which reflect zones of weakness in the Earth's crust. Even if a fault zone has recently experienced an earthquake, however, there is no guarantee that all the stress has been relieved. Another earthquake could still occur. In New Madrid, a great earthquake was followed by a large aftershock within 6 hours on December 6, 1811. Furthermore, relieving stress along one part of the fault may increase stress in another part; the New Madrid earthquakes in January and February 1812 may have resulted from this phenomenon.

Collapse of structures, such as buildings highways, bridges can trap people underneath rubble. Broken gas lines, petroleum pipelines and downed electric wires can cause fires. Due to  disruption of roadways, it may be difficult if not impossible for firefighting equipment to be brought into the earthquake zone. Houses may be uninhabitable and residents of the area may lack shelter.

Earthquakes beneath the ocean floor sometimes generate immense sea waves or tsunamis (Japan's dread "huge wave"). These waves travel across the ocean at speeds as great as 960 kilometers per hour (597 miles per hour) and may be 15 meters (49 feet) high or higher by the time they reach the shore. During the 1964 Alaskan earthquake, tsunamis engulfing coastal areas caused most of the destruction at Kodiak, Cordova, and Seward and caused severe damage along the west coast of North America, particularly at Crescent City, California. Some waves raced across the ocean to the coasts of Japan.

Liquefaction, which happens when loosely packed, water-logged sediments lose their strength in response to strong shaking, causes major damage during earthquakes. During the 1989 Loma Prieta earthquake, liquefaction of the soils and debris used to fill in a lagoon caused major subsidence, fracturing, and horizontal sliding of the ground surface in the Marina district in San Francisco.

Landslides triggered by earthquakes often cause more destruction than the earthquakes themselves. During the 1964 Alaska quake, shock-induced landslides devastated the Turnagain Heights residential development and many downtown areas in Anchorage.

Photos of the devastation of the 1906 San Francisco earthquake 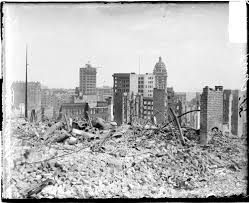 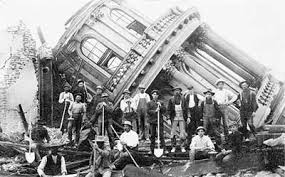